Illegal dumping of hazardous effluents into Vrishabhavati river and its tributary channels at night is a pervasive malpractice going on for decades. Each dump is a toxic hazard that kills everything in its wake. Grave and unpredictable damage has been unleashed to the Vrishabhavati riverine ecosystem on a daily basis. As the chemical air resulting from the dump wafts into the homes on Vrishabhavati river bank, people suffer from headaches, nausea, tiredness, burning sensation and asthma. Citizens setup night vigils to catch the perps in action. The most recent one took place the night of 03rd Apr near the gate of Provident Sunworth marketing office.

The citizens stood watch and alerted Kumbalgodu police when a 20,000 litre capacity Bharat Petroleum tanker pulled up next to the river to dump. The police rushed to the spot within minutes, by which time the truck had dumped,  and seized the tanker. 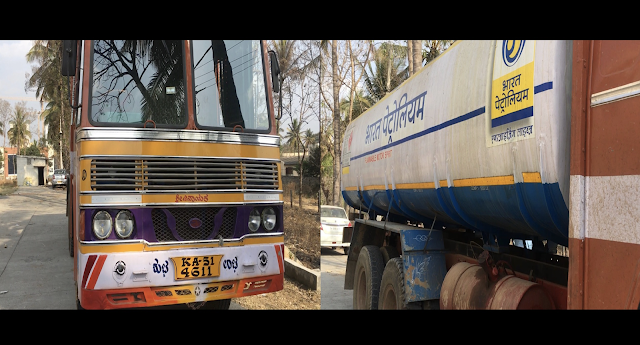 Little did the citizens know that catching the tanker in action was the easy part. The citizens recounted the chilling experience of police aggression faced by them: Simply asking for the FIR to be filed, ticked off the circle inspector, who went on a bitter verbal attack, shocking us. Refusing to sign the lackadaisical Mahajar, as it was lacking the necessary details created additional friction with the police. Facing vehement resistance and non-cooperation, we felt the need to call the police on police. Only after the intervention of SP, Ramanagar, who came personally to the police station,  things started moving, just a little  bit and FIR 0062/2021  filed.

Review of the FIR by Bangalore Environment Trust, revealed that despite having the driver’s name and address, the police had not captured those details in the FIR. The absence of this crucial detail is the foundation for ineffective investigation and will eventually result in cancellation of the FIR. The same was observed with two other FIR’s ( 0229/2020 and 0227/2018) that were filed under similar circumstances. This pattern of fooling the citizens by filing ineffectual FIRs is clearly indicative of police complicity in the matter.

In this day and age, with cameras everywhere and numerous check posts on Mysore road,  it seems like child’s play to track these dirty dumpers. But to no avail. The eyes on the ground, that are to watch and ward,  are the very eyes that are looking the other way, thus enabling this organized environmental crime to exist and thrive.

Pressured by the citizens, police added beats while pollution control board has deployed Marshalls. These superficial efforts are comparable to a quack doctor trying to cure cancer with paracetamol. Underneath, the cancer spreads and establishes itself.

This issue was later covered by Bangalore Mirror